Proloquo2Go is ready for iOS 13 and Dark Mode

Every year Apple releases a new version of iOS. We typically spend much of the summer making sure our apps play well with the new iOS version. This year one of the exciting features in iOS is Dark Mode. Last year Apple introduced Dark Mode on macOS, now it is coming to iOS. Many people find Dark Mode easier on the eye, especially when using a device at night or during low-light conditions. More importantly, for some people with visual impairments, migraines or other visual disorders Dark Mode makes a real difference.

It has always been possible to change the button and background colors in the Proloquo2Go grid. With Dark Mode, other parts of the app that you cannot adjust colors for, such as Edit View and the Options, will automatically get a dark appearance.

You can turn Dark Mode on or off in the Display & Brightness section of the iOS Settings app.

Run Proloquo2Go side-by-side with other apps

With Proloquo2Go 7 we have added support for Slide Over and Split View. This allows you to run two apps at the same time on any recent iPad (iPad Mini 4 or later, iPad Air 2 or later and every iPad Pro). For example, you can watch a YouTube video and quickly pull up Proloquo2Go into Split View so that you can say something about the video you are watching. Or, you could run Proloquo2Go and Messages side-by-side: say something in Proloquo2Go, and then copy and send it through the Messages app.

You can turn these features on or off in the Settings app. Just go to General and then select Multitasking & Dock and then turn Allow Multiple Apps on or off. Visit Apple’s Support site to learn more about Slide Over and Split View.

We are really excited about this new feature. For years parents and adult AAC users have asked us to make it easier to make phone or FaceTime calls with Proloquo2Go. Until now, Apple’s noise cancelation technology made it impossible for the person on the other end of the line to hear the Proloquo2Go speech coming out of the speakers. So you needed two devices, one for Proloquo2Go and another to make the call. Not very convenient. So we are happy to announce that starting with Proloquo2Go 7 and iOS 13 you will be able to use Proloquo2Go to speak on a call made with the same device.

You will need iOS 13 or later for this feature. Note that you can download additional or higher quality iOS voices for use in calls. Visit Apple's Support site to learn more about the iOS voices.

One final exciting announcement to share is that we will soon be releasing Proloquo2Go 7 also on Mac. Using the new Catalyst technology introduced in macOS Catalina we were able to bring Proloquo2Go to macOS. Stay tuned for more information and a release in October. 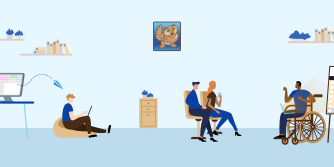