It’s a strange time for all of us

A while back, one of the AssistiveWare team members asked me whether I would like to write a blog post. I considered this an honor. AssistiveWare products have allowed me to complete classes at university, like counseling, which I would not have been able to complete otherwise.

The blog post intended to be about visual storytelling as a way for AAC users to strengthen self-identity and pride.

When the Coronavirus became world news though, I thought that there were far more important things that needed to be shared.

In recent weeks, I have been worried for my disabled peers around the world, and for other AAC users. There have been many frightening articles about the vulnerability of those of us with complex conditions. There have been a lot of posts that have triggered anxiety for many of us.

As a member of the online AAC community, I know that many of us depend on social media. It is the only place that some of us have access to communication in a way that gives us the time, and space that we need to communicate.

Many of us have needed to limit time on social media recently, to reduce anxiety. This means that we have been without the connection that everybody needs, especially at this time.

People need to be able to process their emotions (or have access to counseling) especially in times of crisis, loss, and trauma. Those who don't speak, or are unable to depend on speech, have the same need to process grief and emotions that everyone else does.

I am passionate about social justice. I believe that we all have the right to define our own identity and to live free from prejudice and oppression. I believe that the diversity of humanity is an important part of a healthy society.

I have spent a lot of time thinking about how AAC users can have access to a way of sharing self-authored identities.

As AAC users, there are lots of stories that are written and told about us. Therapists write reports. Doctors comment on what we can and cannot do, and what we will be able to do in the future. Families share stories from their viewpoint. Support workers hand over stories to families, agencies, or therapists.

Many people who use alternative forms of communication are never given the opportunity to challenge these stories, to reflect their true identity. It is particularly important for us to have this equal right, because so often other people's perceptions of our lives are entirely different to those that we are living.

Some of the stories that are told come from strange ideas about "fixing" things that were never broken, to begin with. Stories are often influenced by broader cultural stories about what “disability“ means, and our stories are lost.

Often, responses to trauma and injustice become considered a part of an internal deficiency, rather than being acknowledged as a response to these traumas and injustices. These are common experiences for those of us in the disability community.

Using Pictello to self- author stories

Pictello is a platform on which sharing the alternative story, to include outsider witnesses can be achieved. The Pictello story of someone’s self-authored identity can then be shared with family, support workers, therapists, or anyone who the person wishes to share their true identity with.

A Pictello story can then be made using photographs of the stories that have been shared with the therapist. This might include screenshots of expressions using symbol-based AAC, photos of drawings, quotes from writing, photos of chosen cards, videos of expressions of movement ( ex. dance or facial expressions), photos of constructions, arrangements of toys, or figurines, or art. It may also be powerful to include the person in the photos of re-authored identity.

Using questions appropriate to the person’s communication, the therapist can then support the person to create a visual story that can be shared.

Visual storytelling, is one way that I believe AAC users can have the experience of creating a self-authored identity, through the sharing of an alternative story. I reflected on how it could be possible to adapt Narrative Therapy to be useful for AAC users. Narrative Therapy makes people the experts in their own lives, and separates people from their problems. It assumes people have the skills, values and abilities that will allow them to positively change their own stories. I developed the idea of, "Locked Treasure Chest Stories".Locked Treasure Chest Stories allow people to use a means of communication other than speech to share stories about their lives (identities).

It may start by drawing, building, making, or choosing a Treasure Chest that the person owns.

The therapist may then work with the person to support them to express the “treasure” in their treasure chest. Below is a Pictello story that I made to explain what a locked treasure chest represents:

Everyone has a Locked Treasure Chest. What is inside is different for everyone.

Inside the chest are things that make us who we are.

There are memories, experiences, hopes, dreams, and values.

Other people might guess what is inside our treasure chest.

They might talk or write about us. These are other people's stories.

Sometimes other people don't understand us.

There are lots of ways to show people what is inside the treasure chest.

One way is to make a Locked Treasure Chest Story.

How can therapists support the creation of a self and re-authored visual story?

Re-authoring stories can be achieved in many ways, including :

For example, in my skills assessment for a counselling class last year, I used a combination of questions, picture cards, and Proloquo2Go in a role play with an actor, who was non-speaking.

I am an AAC user, so I used a combination of text based AAC, pictures, and Proloquo2Go to deliver the questions.

The scenario was about a young man who was experiencing depression . Two of his immediate family members had died during his life.

During this assesment, I :

Although there was not time, a story about hopes, dreams, fears, values beliefs, memories and experiences that make up his ‘locked treasure chest’ could then be created using photographs and screenshots of the process and new story, using Pictello.

At this time, while we are living in times of uncertainty, a similar process could be used to express self-authored stories about emotions, feelings, grief, hopes, dreams, fears, values beliefs, memories and experiences.

It is important for everyone to have access to ways of processing emotions that are useful to them. If the ways that we process emotions are misunderstood, this will lead to stories being told that are not consistent with our identity.

Everybody has the right to express their true identity, and to be understood.

Johanna Schmidt is an AAC user, cat lover, and is currently studying Social Work at La Trobe University in Australia. She is passionate about disability rights issues -specifically the elimination of trauma in care, universal access, and the right we have to be the author of our own identities. 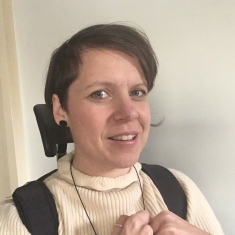 Why does Proloquo have a fixed grid size?

The grid size is an important part of any AAC system. In this blog post, we explain why we decided to offer only a single grid size for Proloquo®. As part of the “Proloquo explained” blog series, it is written for anyone who wants an in-depth explanation of the design of the new Proloquo AAC app.
7 minute read
Read more