Angelman syndrome is a genetic syndrome that occurs in about 1 in 15,000 children. Among the symptoms are developmental delay, lack of speech, seizures, and difficulties with walking and balance. Until recently, it was believed that people with Angelman syndrome had severe cognitive deficits and that very few of them would be able to learn to communicate fully, or read and write. Then came the revolution.

Parents, teachers, and therapists began to question the gloomy communication prognosis, which was based on research using standardized testing. In such testing, children are asked to perform tasks by unfamiliar adults in unfamiliar and unnatural contexts - “point to the apple,” “give me the banana and the pencil,” “touch your elbow,” etc. Angelman children had difficulty with these tasks, but their parents, teachers, and therapists knew that in more natural situations, they showed they could understand the same words they had “failed” to recognize in the tests.

Parents and professionals began to advocate for more natural assessment and teaching methods - ones that took place in fun daily activities, without demands for performing drill-like repetition out of context. Research was beginning to show that people with Angelman syndrome have significant motor planning challenges such as apraxia, as well as anxiety. Combined, these conditions make it very difficult to perform actions on demand. Skills that parents saw their children exhibit in everyday life (that weren’t “provable” in a testing situation) were now backed up by scientific research.

Taking up the cause

Revolutionary parents and professionals began to take up the cause. In Australia, Mary-Louise Bertram, an early childhood teacher and AAC specialist, was assigned a classroom with four students with Angelman syndrome. Using aided language stimulation to teach use of AAC, and making sure students had access to their AAC systems throughout the day, she saw her students develop the ability to express themselves and to move beyond simple choice making. Mary-Louise began to spread the word about these techniques to parents in Angelman syndrome organizations outside of Australia, traveling to the US, Canada, the UK, France, and Norway to speak and work with parents and school teams. 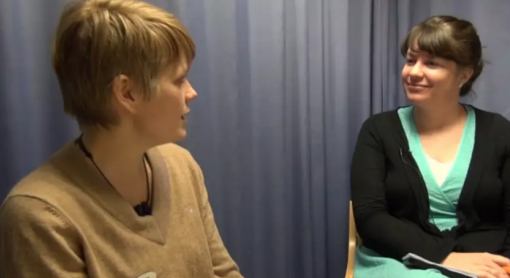 Interview with Mary-Louise Bertram by Frambu competence center for rare diagnosis in Norway.

In Canada, Erin Sheldon was a parent whose daughter was diagnosed with Angelman syndrome, autism, and visual and auditory processing disorder. But Erin knew that when information was presented to her daughter in ways that she could process, she was able to learn.

Erin began to search for the best way to teach her daughter, returning to school to study special education. At Closing the Gap, an assistive technology conference in Minnesota, she met Dr. Caroline Musselwhite (SLP) and Dr. Gretchen Hanser (OT). These world-renowned AAC and early literacy experts had also seen the power of aided language stimulation for people with complex communication needs. Together they began to train other parents and professionals in the Angelman community, through grants from the Angelman Syndrome Foundation, the Foundation for Angelman Syndrome Therapeutics and The Angelman Network. A summer camp and a speaking tour of the US on literacy, AAC, and Angelman syndrome soon followed.

These efforts were successful, but since they required 1:1 contact, they reached a limited number of people. Enter the Foster Family Foundation of California, to take the revolution to the next level! Through a grant from the Foundation, the Angelman Syndrome Foundation Communication Training Series was born.

The Communication Training Series features Erin Sheldon, Caroline Musselwhite, Mary-Louise Bertram, and Maureen Nevers (an SLP and AAC specialist from Vermont). Together they are presenting a year’s worth of weekly one hour webinars. These free webinars cover:

Webinars are presented live, with a recorded version available on YouTube. There’s also an active and supportive Facebook group for questions and for sharing your challenges and triumphs. Most wonderful of all is the philosophy of respect, joy, and open expectations for all AAC learners that pervades these webinars. If you haven’t been following them, you’re missing the best AAC course around, accessible to parents and professionals alike.

The efforts of the various national Angelman organizations continue to grow. In the United Kingdom, Angelman UK holds a biennial two day Communication Conference for its members, which include hands-on experiences with AAC systems for parents and their children with Angelman syndrome.

In the US, the Foundation for Angelman Syndrome Therapeutics and the Angelman Syndrome Foundation regularly offer conferences focused on communication and AAC issues, with presentations from parents and AAC professionals, as well as a vendor hall where various AAC solutions can be tried and questions answered.

The skill and dedication this community has shown is making a difference in the lives not only of people with Angelman syndrome, but countless others who share their profile of communication challenges.

Share this post and join the revolution the Angelman community has started - they’ve made it clear that full communication is for everyone! 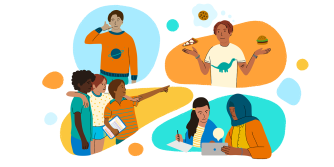 Nonspeaking people have more to say

For AAC Awareness Month 2022, we’re introducing #MoretoSay, a campaign to challenge assumptions about people who cannot speak. Assumptions that they have no opinions or anything to add to a conversation. Pam Harris, an AAC expert and Josh’s mom found that her son had more to say.
3 minute read
Read more