When I was 9, I finally figured out how to read. It was the summer between 2nd and 3rd grade, and my special ed teachers had spent the past two years trying everything in their power trying to teach me how to unlock the written word. Due to a long drive, my parents got me some comics so I could at least look at the pictures.

This led to me figuring out how reading worked, which led to a love of the X-Men. I was able to get to talking with other kids my age about it at daycare, and one day one of the counselors there suggested something that blew our little minds: “What,” he asked, “If you could *BE* X-Men?” He brought out a copy of The Batman Roleplaying Game (think Dungeons & Dragons but with superheroes instead), helped us make characters, wrote up the X-Men using the rules, and I was instantly hooked.

I am autistic. I have always found speech and socialization difficult. I was in special education, in one form or another, until I was 13, and had speech therapy until I was 10. I had HUGE troubles dealing with my peers, but through the medium of tabletop roleplaying games I suddenly had a way to relate to others. They taught me a variety of social skills I had trouble working through in the classroom, and helped me learn how to communicate effectively.

While speech for me has always been stressful and exhausting, RPGs presented a safe space for me where I was able to work through my communication more effectively; where the stress and exhaustion felt worth it. Something about the small social environment, the intense involvement with the story, and being able to speak as a character who was not me helped a lot. RPGs became the one place where I could avoid speaking neurotypically, and where that wasn’t just accepted but encouraged, especially when it let me engage more with the story.

I recently started using AAC back in the fall of 2017, and after my parents gifted me with an iPad loaded with Proloquo4Text for Christmas, I have started using it more. It has become my primary mode of communication, a more effective, organized, and stress-free way for me to express myself. This surprised people used to gaming with me, as I could force myself to be quite eloquent at the table, but the acceptance I have found from my friends and the RPG community since has been fantastic. I had to figure out a way to work around my biggest hobby and interest, which led me to some realizations about roleplaying games. Their role as a tool for socialization, and their huge potential for building communication skills, whether via AAC (be that high tech, low tech, sign language, etc.) or verbal speech, makes them an excellent resource.

The Benefits of RPGs

What is a roleplaying game? Tabletop roleplaying games (RPGs) are probably most famous due to Dungeons & Dragons (now in its 5th edition and in continuous print since 1977). At their core, they are a collaborative storytelling experience where one players, often called a Games Master (or GM, sometimes Dungeon Master, Storyteller, or a number of other terms) controls the overarching narrative. The other players take on the roles of characters within that story, narrating their own actions and sometimes other parts of the world, with the GM voicing every other person they encounter.

Most games use a randomizer like dice or playing cards to determine the outcome of actions within the story, and each character will have a number of attributes, skills, and abilities which make them unique from the others at the table (they may be stronger, or more charismatic, or have a special ability or power others do not possess). As available RPGs cover virtually any setting you can imagine, and many which also cover favourite shows and books from Game of Thrones to My Little Pony to Marvel comics characters, there is a lot of room to find the right game for the right group.

RPGs presented three key benefits that I feel can really help where AAC users are concerned:

1) A controlled social environment. I have huge problems in social situations, where the rules are often unclear and there are more than 3 or 4 people. Most RPGs have between 3 and 6 people at the table, but with rules, purpose, and the moderating influence of the GM, the social environment is more focused and controlled. The GM can make sure that a player having a more difficult time communicating can get their point across…and a GM who has trouble communicating can trust that their players will wait for them to express themselves!

RPGs also teach a lot about taking turns in conversation, often having specific rules about who speak or contribute at a given time. This can take a lot of the anxiety out of conversation, because it is clear when it is YOUR turn to speak, and when it is your turn YOU are the one speaking (especially useful for players who take longer to compose what they are going to say via a device).

2) Safe exploration of storytelling with peers. Roleplaying games are a communal activity, even when there is just the GM and one player. Everyone involved is interacting with the same story, and there is really no wrong way to play a game! This means that each player is able to contribute based on their abilities, with the game world tailored to the strengths and weaknesses in their language. If a player has very limited language, the GM can build scenarios where that language is at its most useful, letting that player stay included even if they have a smaller vocabulary of words, signs, or symbols that the other players at the table.

The fact that the entire game world is make believe has another benefit: Unlike physical play time, within an RPG the limit is imagination. This sounds corny, but I can personally speak to how empowering it can be for a clumsy, overweight kid with poor language and social skills to be able to take on the role of a wealthy, suave, physically capable superhero.

As I mentioned, there are a LOT of RPGs out there, covering every genre and style of play you can imagine. Some use dice, others cards, and some use none at all but instead award tokens or points. However, there are a few that I am going to highlight, as they are excellent resources for those new to playing and running games. They have simpler systems, and are generally made to have a much lower rules expectation for the players.

A few tips for using AAC while playing

I recently attended an RPG convention in Ottawa called CanGames, and was stunned by how accepting the people were there of my communication device. I got to play a game called Ross Rifles, which is currently in development by Toronto’s Dundas West Games. Ross Rifles is a historical RPG set during World War I. It is meant to both simulate, and educate about, the experiences of a Canadian soldier during that period in history. It was being run by an author who also works with autistic teens and adults, Daniel Kwan. He really helped me find space at the table, where my communication was respected and I was able to keep up with everyone else.

To give some examples (which I think are worth remembering for anyone running a game with players who use alternative means of communication): He paid attention to my typing, and spoke up to make room in the conversation with other players so that I could play my message when things were getting heated. He directly solicited my opinions on things to make sure that I was able to give opinions on things. Both he and the other players also paid attention when I held up a hand to show that I had something to add, and everyone was patient in allowing me to type out a message on the fly. Over the first thirty minutes or so of play they began to develop a system where a degree of small talk while I was typing a message was fine for everyone, but then they would listen once I was done typing. My decisions were taken as seriously as those of the speaking players.

In other game situations (if I was more prepared), I might have preset messages (some potentially quite detailed) by which to express myself more quickly. Making space for me in the conversation of the game helped me to stay included, and these accommodations did not interrupt the flow of the game for anyone else. However, I also recognize that I type VERY quickly and use a direct text to speech program, so more patience may be required for players who type more slowly, or who use low or high tech symbol-based AAC, as it may take them longer to form their answers.

I love roleplaying games. They are my biggest passion, and I am so happy that they remain very accessible to me even as I use an AAC device to play them now rather than verbal speech. I believe that they hold a HUGE amount of potential for teaching both language and social skills while also being a really fun, engaging activity. 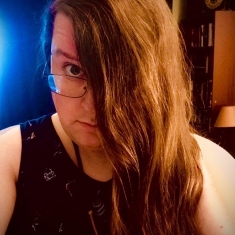