AAC systems can be divided simply into two categories: those that use picture or symbol supports (symbol-based AAC) and those that use text or typing (text-based AAC). What is not simple is deciding which system is best or preferred for a person who cannot rely on their natural speech alone.

When text-based communication is used, words are formed from the 26 letters of the alphabet. The primary advantage of text-based AAC is that any word or message can be generated from this small symbol set of letters. On the other hand, symbol-based AAC uses a graphic image to represent whole words. Selecting a single symbol can be more efficient than typing the whole word. The drawback is trying to organize the many words with symbols to find them to communicate efficiently. At some point, it often becomes more efficient to simply type the word and use tools like word prediction to speed the process up. However, it uses different cognitive processes to spell a word versus recognize a visual symbol. This is why every person’s experience with symbols and text is individual.

Different experiences with symbols and text

Sara is just beginning communication using an AAC system. Her school team would like to develop her literacy skills. They wonder how symbol-based AAC will affect her literacy development.

Samuel has used a symbol-based communication system since he was a child. Recently his Mum noticed that he has been typing in text fields. For example, he searches for pictures in Google images or for videos in YouTube. He often sends short text messages to friends and family. She wonders if he would benefit from a more text-based AAC system.

Whether the person is starting out with AAC or has been using AAC for a while, it can be important to discuss and investigate the advantages and opportunities that symbols or text based systems can provide.

Some AAC users told us that there are times when, often due to some form of stress, they struggle more with motor control and word finding. At those times, they find that selecting a familiar symbol is easier than typing a word.

“I prefer Proloquo2Go during moments of particular overwhelm. It's not the pictures that are important to me, it mostly just helps to be able to locate the word rather than think it up on my own.” ~ endever* corbin, AAC user

It is normal to use a variety of tools to communicate. Every time we interact with social media, we use a combination of text and images. We might upload a photo along with a caption to explain it, using word prediction on our phone to type the message. We choose between icons depending on whether you like or love the post. AAC includes almost any alternative to speech, including social media. Combining visuals with letter-by-letter spelling and whole words is something most of us do every day. AAC is no different.

Rarely do we see people communicate in only one way. Rarely do we see just symbols or just text. Communication can be a complex weaving of different systems and ways. It is not one or the other.

“When your mind is feeling cloudy it can be easier to see the inherent context in a single word or set of symbols. Instead of forming full and proper grammar, we might string together related concepts that express things…I will type single words, shorter sentences, or rely more heavily on my Quick Talk buttons (which is why I colour coded them in the first place). It doesn't mean we have LESS to communicate, or for those who are literate that we are being ‘immature’ or being lazy...it means that in that context and that moment, that is the best, most comfortable method we have to communicate.
~ Saoirse Tilton, AAC user

Using a balanced AAC system with access to an alphabet, alongside comprehensive literacy instruction, is the best chance for an student to develop literacy.

Having access to the alphabet within your AAC system is just the start. All children and people with early levels of literacy need to see how they can use their alphabet and typing during conversations and learning.

For example, when Sara is in class reading the “Piranhas Don’t Eat Bananas” book, there are many opportunities to use her AAC system. Firstly, she can access core words such as: like, eat, good, bad, what and not, etc. Next she can use fringe words such as fruits and body parts. But most importantly, she can use the alphabet in the system to type out the word “Piranha”. We may not use piranha often enough to add it as a button within her vocabulary, so this provides the perfect chance to show the alphabet within real activities. In this way, Sara can develop some literacy skills from right within her AAC system.

Teachers, therapists and families can do lots to help an AAC user develop literacy using their AAC. Some strategies include:

(Please note: some of these strategies relate to specific functions in Proloquo2Go)

AAC users should be involved in this process too, as often as possible,. They can decide what words are added as new buttons, what words do not need symbols, and which messages to send as emails to friends, etc.

Many times a symbol-based AAC user starts using text and typing. If they have access to the alphabet, they may do this within their AAC, or perhaps they are accessing keyboards and typing in other places.

Consider a more text-based AAC approach if the user:

In these instances, it may be time to try an AAC system that has more focus on text-based communication, with efficiencies to make typing faster. For example, word prediction can significantly speed up typing rate, but most people need practice and instruction to use it effectively.

In a transition period, an AAC user may continue to have access to both their symbol-based and text-based AAC. It is up to the AAC user to decide what system is best going to meet their communication needs in different situations.

Many AAC users will continue to use both symbol and text-based AAC systems.

For example, once Samuel gets access to a text-based system AAC he may use it at home at first. He may practice using it to type messages to his friends as he gets familiar with it. At school with teachers, he may continue to use his familiar symbol-based system.

Teachers, therapists and families can support AAC users moving to text-based systems. Some strategies and supports include:

(Please note: some of these strategies relate to specific functions in Proloquo4Text)

AAC users should be closely involved in this process. They can determine the sentences and phrases to personalize for certain situations and decide on preferences that makes their system easier to use. The goal of instruction has been met when the AAC user can fully direct their AAC support.

Using symbols to back up text-based communication

During times that typing and spelling is difficult to access, an AAC user may benefit from some symbol supports. It may help them to find the messages they wish to say if a symbol is with the message.

For example, Daniel recently added some key messages to buttons in a symbol-based system. Each button has a symbol to help remind him of what the message says. Even though most of the time he can type, at times, he will use the symbol-based messages to say what he needs quickly and easily during busy times at work.

AAC users themselves will likely know when they may need some symbol supports as back ups. They can plan and program the messages and sentences they most need. They will select the symbols and set up that will help them best.

Although AAC systems tend to be either symbol-based or text-based, rarely does the communication of an AAC user need to be one or the other. The best AAC is the system that suits the AAC user and meets their communication needs. 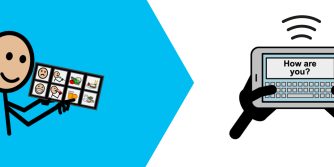 Transitioning from symbols to text-based AAC

How can we better support the development of and transition to literacy? When should we start working on this transition?
5 minute read
Read more