Graphic symbols are an essential support for many AAC users. People who cannot yet read can learn to recognize the symbol and communicate the word. Many people who are literate find that graphic symbols are fast and efficient. Some AAC users who can spell fluently say that graphic symbols reduce the cognitive load of communication when under stress. Symbols let them rely on symbol recognition instead of generating words. Proloquo’s Crescendo Evolution™ vocabulary comes pre-programmed with about 3,200 buttons with graphic symbols. There are three reasons why a button might have a symbol.

First words
Words that emerge early in language development have been symbolized in Proloquo. Our intent was to symbolize the common words that children learn before they become literate. We relied on multiple fields of research to identify these words, including a wide variety of word lists generated from language samples of young children, children acquiring English as a second language, and children with a range of disabilities.

High-frequency words
We symbolized words used most often by most people. We emphasized content words (the words that carry the meaning in a sentence) such as nouns, verbs, and descriptors. We used anonymous data from tens of thousands of AAC users, including beginners to the most advanced. We also used research on the word frequency of English speakers in general.

Conceptually important words
Some words express an important idea, but are not used frequently. These words are essential to participate in the school curriculum or broader community, even if they aren’t used in daily conversation by most people. Important concept words include respect, privacy, or responsibility. We relied on vocabulary research and national school curriculums to identify these words.

Graphic symbols are valuable, but they have their limits. They become less helpful when a concept is difficult to picture or symbols are hard to distinguish. Proloquo includes over 9,000 text-only buttons in the base vocabulary. There are 4 reasons a button might not be symbolized.

Function words
Some words are used frequently by many people, but they do not carry meaning. Their role is to help connect words in a grammatically correct sentence. These function words include articles (a, the) and conjunctions (and, but, so). These words emerge later in language development. They are also difficult to picture. Many of these words are taught as sight words. We included these words as half-height, text-only buttons. This preserves space in the grid for words that carry meaning, which are the most essential to beginning AAC users.

Low-frequency words
The English language has essential concepts, like good and bad. We add nuance to these words with synonyms, like excellent or terrible. Good and bad are general high-frequency words and can be used in any context to describe everything from food to traffic to politics. Excellent and terrible are used much less often, but they make our language sparkle. Using synonyms of bad such as terrible, awful, inferior, and offensive are the mark of a fluent English speaker. But trying to symbolize the difference between terrible vs. awful or offensive is challenging. Proloquo includes these words as text-only Related Words. Users access these synonyms by first selecting the essential concept word.

Words in a closed set
Many nouns are part of a set of words. A closed set has a finite number, such as every American state or African country. It is not efficient to create a button with a symbol for every state or country. Graphic symbols for these kinds of nouns rely on outlines of the shape of the state or the country’s flag. This is fine when distinguishing between a few states but ineffective for distinguishing all 50. Memorizing every state flag or every state’s shape is more difficult than recognizing the printed word.

For those reasons we feel it is important to provide the complete closed set of certain words. These words are used infrequently, but having access to the name of a particular state is important for inclusion in the regular curriculum. For these we made an exception to our practice of relying on word usage data. Otherwise, Florida and California would be symbolized for all users, but small states would not appear at all. For all these reasons, Proloquo includes a number of folders with lists of text-only, half-height buttons. This allowed us to ensure that every user has access to all the words in important closed sets. The list format also allows the user to rely on alphabetical order to select a state and to use text clues (such as the initial letter and length of a word) to select the word they want. In this format, the difference between Ohio and Oklahoma is more distinguishable than trying to select either of these states from 50 graphic symbols.

Words in an open set
Open sets are very broad, and include everything from all the types of cheese to all the species of dinosaurs. Our user research indicated that certain words were used more often, such as cheddar vs. gouda. But relatively few people talk about either type of cheese on a regular basis. For this reason, Proloquo often includes members of an open set in a text-only, half-height list of Related Words. We did not try to be complete or exhaustive with open sets because they generally represent personal interests or less common topics. Instead, we included only the most frequently used words. Users can personalize their vocabulary by adding to these lists or creating buttons based on their own personal preferences. 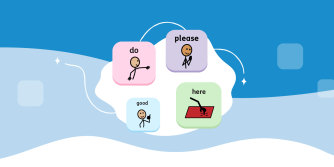 How is the Proloquo vocabulary organized?

For an AAC system to be easy to learn and use it is essential to have a good vocabulary organization. In this blogpost we explain how the vocabulary in Proloquo® has been organized really efficiently. As part of the “Proloquo explained” blog series, it is written for anyone who wants an in-depth explanation of the design of the new Proloquo AAC app.
6 minute read
Read more 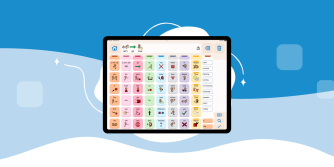 How did we make Proloquo extremely efficient?

AAC is always slower than speech so a good AAC system needs to be as efficient as possible to make it easier to participate in conversations. In this blogpost we explain how we were able to make Proloquo® really efficient. As part of the “Proloquo explained” blog series, it is written for anyone who wants an in-depth explanation of the design of the new Proloquo AAC app.
9 minute read
Read more