Ever since we released our first core word vocabulary in multiple grid sizes, back in Proloquo2Go 2.0, we’ve been recommending that people choose the largest grid size they can use. Choosing a large grid size gives you the most language on a single screen. With more language available at a glance, you can quickly recognize the words you want to use. You don’t have to remember which folder a word is in and then navigate there.

For example, let’s say you wanted to say “Can we play with that now”. On 7x11 all the words you need are right on the home page. On a smaller grid size, like 5x9, only the word “that” is available on the home page! You can still say this sentence on 5x9, but it will require a lot more navigating and a lot more language knowledge. You’ll need to understand and remember that:

Sometimes people try to work around this problem by picking a grid size that’s just a little above the beginning communicator’s current level. This gives a simpler display, while including the “next step” vocabulary you need to model. As the communicator learns new vocabulary, the grid size is increased again.

However, every time you increase the grid size, the buttons move to a different place in the new grid. While we’ve tried to keep the buttons in the same general area from grid size to grid size, it’s impossible to keep them in exactly the same place. This means that the beginning communicator (and you as the person modeling for the AAC user), has to re-learn where everything is each time you change the grid size. 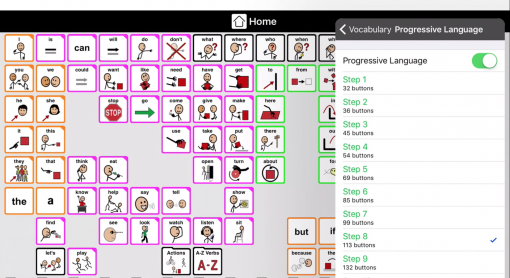 Another way to gradually increase the available words is to start with a larger grid size, but hide the more advanced buttons. As the AAC learner progresses, you can gradually reveal buttons until they’re all showing. This means that buttons are always in the same place. We’ve made this easy in a new feature we call Progressive Language.

Once you turn Progressive Language on, you can easily choose a Language Step. Words are revealed in a logical order based on language development and frequency of use. 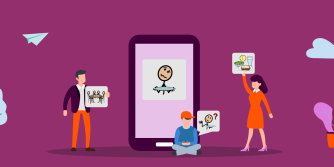 Communication Functions: All the reasons we communicate 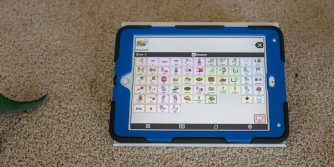