He lives in Brisbane, Australia, with his Mum and Dad, his twin brother, Lachlan, and his older sister, Shelby. Tom also has an awesome network of friends, including his best mates, Dylan and Elli. Friends and family are very important to Tom.

When you meet Tom, sometimes you can get a glimpse of his personality - he loves a joke and can be a real trickster! Other times, Tom can be shy and uncertain. But when he’s surrounded by good friends and family, Tom’s confidence really shines through.

After school and on the weekends, you will find Tom in one of two places: doing sports or watching a movie. Tom loves sports and staying fit. He is a regular at the local gym and works hard to build those muscles by lifting weights and boxing. He also plays Rugby Union. In 2017, he won the award for the most improved player in his rugby club - a great achievement. Tom also swims regularly, and is currently training with the Special Olympics team.

Tom is also a movie buff. He loves to watch movies - on DVDs and at the cinemas. Tom loves nothing more than to chat about movies - what is coming out soon, what new DVDs he wants to get, why he likes certain movies. Don’t be shocked by his movie choices – he watches the scariest movies around.

Tom loves to talk. However, often his speech can be very difficult to understand, especially for people who don’t know him well. When this happens, it can make Tom become very shy and prefer to say nothing at all. Over 8 years ago, Tom got Proloquo2Go, our symbol-based AAC app. Using Proloquo2Go, he’s able to put words together to say longer sentences; thoughts that he could not express with speech alone.

Once his team forgot to turn the edit pencil off in Proloquo2Go. The next week, Tom arrived to school with over 200 new buttons that he had added himself. And to no one’s surprise, they were all movie titles! Not everything was spelled perfectly, but it was the first time Tom showed those around him just how much literacy ability he had. Since then, Tom regularly adds his own buttons so that he has the words for the topics he most wants to talk about. He also loves to write his own stories in Pictello, our social story creation app, and share them with everyone.

Using AAC has given Tom a way to communicate his thoughts and feelings, but also to have conversations with his friends and family. Similarly, his regular use of Pictello allows him to share news with those around him. Making meaningful connections is really important to Tom - he wants to laugh and joke and share a story more than anything!

Tom has just started his last year of high school. where he’s now mostly focused on life skill activities to help get him ready for life after school. Tom’s adult life is before him and he has big plans and dreams. Tom and his family want him to live a life as a valued member of the community; where opportunities, participation and contribution are encouraged. We can’t wait to see where the next few years take him – maybe to Abu Dhabi for the next Special Olympics? 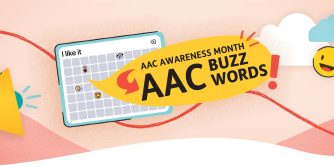 To help us all get our heads around the common jargon we share, we have compiled a lists of over 20 AAC buzzwords. This compilation includes definitions of commonly used terms such as presume competence, modeling and attributing meaning. Each buzzword is clearly explained with some key tips and reminders. Share our buzzwords within your teams.
2 minute read
Read more