He lives in Brisbane, Australia with his Mum, Dad and older sister Grace. He’s not just the class clown, however – Tom is also kind and thoughtful, and his caring nature towards others is clear.

Tom started high school this year and even with all the changes and challenges, he is doing great. He likes to make friends and participate in the opportunities around him. He calls himself a “learner” because he knows that there’s always more to take in, and he is keen and eager to do this (most of the time). One of his favorite subjects at school is music. He plays percussion in school band and loves to hit that bass drum!

Outside of school, Tom is a positive and active kid. He wants to be included and accepted, whether he’s riding BMX bikes or playing Touch Football. He is a very active member of his local Scout group, recently moving up to the official “Scout” group after years of being a “Cub”. Next step is becoming a “Ranger” in two years, something Tom is very keen to achieve. Scouts gives Tom the chance to make friends and participate in amazing learning opportunities within the community.

Tom has been using Proloquo2Go since he was 4 years old. Back then, he mostly used sign language to communicate as there were very few words that he could say. Proloquo2Go became a voice for him, as he learned to make choices, say what he thought, answer questions and so much more.

Over the years, Tom’s speech skills have developed and grown. Now you cannot keep him quiet. However, Tom has difficulty with quite a few sounds, which makes it often hard to understand what he is saying. Since Tom started using Proloquo2Go, the system has evolved from being his essential tool for communication, to being an invaluable back up support. He uses Proloquo2Go with unfamiliar people, or when people do not understand him. Last year, he used Proloquo2Go to give a speech when he was running for student council, and often he has used it to give oral presentations in class. Proloquo2Go will be a tool that Tom can use throughout his lifetime. And especially for when he wants to tell a joke. 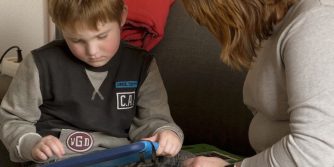 A voice for my son

Martine Meijers shares her experience of introducing Proloquo2Go with a child's voice for her son.
4 minute read
Read more