Version 2.0 adds enhanced accessibility features including an optimized scanning order for Switch Control users to speed up communication. As an industry first, version 2.0 is compatible with Acapela Group’s my-own-voice service, which enables individuals diagnosed with, for example, ALS to recreate their own voice synthetically before losing their ability to speak. The update also expands the number of supported languages from 15 to 18 by adding Text to Speech and word prediction for Arabic, Russian and Greek.

The essence of Proloquo4Text is to enable individuals, who have difficulty speaking, easy conversation and full participation in society. It achieves this through a customizable single screen layout with quick access to personal phrases, powerful word and sentence prediction, the ability to easily switch back and forth between multiple conversations and a fully configurable user interface to adjust appearance and configure functionalities.

As one of AssistiveWare's Proloquo4Text users summarizes her experience:

“Proloquo4Text for me means effective and efficient communication in intimate and large life party setting. It means being seen as an equal, but most of all it means sharing conversations, jokes, and stories with my son.” Lisa Lehmann, Proloquo4Text User, Australia

“The quote by Lisa exemplifies the vision we had when we first started to design Proloquo4Text. We want users to be able to communicate with minimal effort and actively participate in society“, says David Niemeijer, CEO and Founder of AssistiveWare.“The 2.0 update is especially important to us because it makes Proloquo4Text even more accessible and helps users with motor challenges to communicate easier and faster than before. By adding support for Arabic, Russian and Greek we are also expanding our geographical reach to offer individuals with communication impairments from those regions the opportunity to communicate in their mother tongue.”

Proloquo4Text 2.0 is $119.99 USD (or equivalent amount in other currencies) and available worldwide exclusively through the App Store in the Education category and includes over 100 free Text to Speech voices in 18 languages. Version 2.0 is a free update for existing users.

AssistiveWare®, a leading innovator of assistive technology software for iOS and Mac OS X with over 125,000 customers worldwide, is committed to collaborating with the global community to make a difference in peoples lives. The company’s flagship product, Proloquo2Go®, is an award-winning Augmentative and Alternative Communication (AAC) application for iPad, iPhone and iPod touch that provides a “voice” for people who have difficulty speaking or cannot speak at all. Founded in 2000, AssistiveWare was the first company to deliver universal access to Mac OS X with its award-winning KeyStrokes™ on-screen keyboard and the first to create genuine children’s Text to Speech voices. Focused on its vision to empower people through innovative technology, AssistiveWare offers a wide-range of assistive technology products and services. 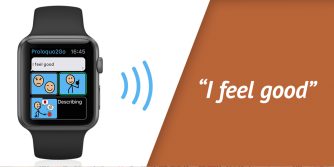