Ten years later, I’m writing this blog while my own daughter’s PODD book is next to me on the couch. A few minutes ago, Maggie whined from her hammock and touched my leg, looking at me. I picked up her PODD and said “I hear your voice. I wonder if you have something to say.” She looked at the book and whined softly but didn’t reach for it. I said, “hmm, you might have more to say.” I turned the page to her key messages, called branch starters. I said “it sounds like something’s wrong…” She vocalized again in the same low whine. I turned to her something’s wrong page. I started pointing to different symbols while saying them aloud. “I wonder if you feel sick… Or if something hurts…” She whined again when I got to “uncomfortable.” I said, “I think something’s wrong and you’re uncomfortable.” I looked around and realized that the fan had been blowing directly on her. Yesterday was wicked hot and she’d been grateful for that cool blast of air. Today is cooler. I redirected the fan and Maggie settled back into her hammock with a smile of satisfaction. She’d been understood.

I know from experience that PODD is a powerful system for people who cannot speak. Despite that first complaint about PODD in our Angelman syndrome community, I now know hundreds of families who use PODD. Doctors once said that children with Angelman could not understand pretend play. They said they could not communicate beyond basic wants and needs. Now we have hundreds of examples of children with Angelman who use PODD and other AAC systems, like . They use PODD to play with Barbie, boss or insult their siblings, ask where their important people are, beg for favourite sweet treats, ask for bedtime stories, suggest somewhere to go, and more.

Most parents find the paper book is the easier place to start. An electronic PODD navigates the system without the signposts that we have in the paper book. In the paper book, we can read the labels on the symbols and follow the book. If I select LET’S GO, I follow these cues to turn to PLACES. When my daughter selects SWIMMING POOL, I reply we CAN'T, but we can GO FOR A DRIVE. I select CATEGORIES to find DAYS & TIMES to tell her we can swim TOMORROW. She argues by selecting NOW and I say CAN’T/NOT TODAY, but SOON. The words that both of us need for this conversation are all there on the same page. I model how I move through the book. I speak the word CATEGORIES while I touch the symbol, then turn the page. This teaches her how she can one day select CATEGORIES in her PODD app and get there by herself.

The other day, Maggie patted the couch next to her. I came and sat with her. Then she put her feet against my legs and shoved. My first thought was “Seriously! You ask me to sit with you and then you kick me off?!” But then I used her PODD to say “I wonder if you have something to say.” She pushed her feet more gently toward me and her PODD book. I said “I think you have more to say” and turned to the page. I said “I wonder if you are asking for an activity… Yes, I hear your voice.” I turned to her activity page and said “I wonder if you WANT to CUDDLE.” She didn’t respond, so I looked for other options on the page. “I wonder if you want a SENSORY ACTIVITY.” She vocalized and pushed her feet at me again. I turned to her sensory page and said “I wonder if you want me to SQUEEZE your FEET.” She put her feet in my hands. I used her PODD to talk about what I was doing as I squeezed her feet and legs. I gave her JOINT compressions and MASSAGED her tight muscles. She leaned into what I was doing. She doesn’t speak, but I swear she can purr! She moved around, so I squeezed her HANDS and SHOULDERS. Finally she moved away. I said, “I think you are ready to STOP.”

Interested to learn more about simPODD, these articles will help you get started:
Are you completely new to simPODD? Read this article : New to simPODD? Start here!
Setting up the basics: Tips on selecting a page set
Customizing your own simPODD: Tips on customizing your new simPODD
Integrating simPODD in your daily life: Learn to carry your PODD: see ME, see my AAC!
Discover simPODD: Explore your PODD: what can I say?

Erin Sheldon is a literacy and language development specialist for Assistiveware. 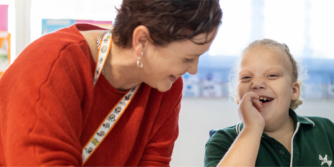 Welcome to simPODD. Starting out with the simPODD system may feel both exciting and overwhelming. We'll help you and your family learn to use simPODD to support your child to share their thoughts.
7 minute read
Read more 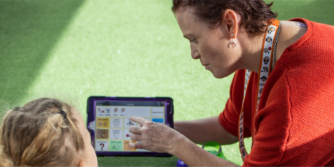 Explore your simPODD: what can you say?

You’ve downloaded simPODD, selected a page set, and learned to carry your simPODD around with you. You are on your way! Your next step is to learn how simPODD works.
5 minute read
Read more